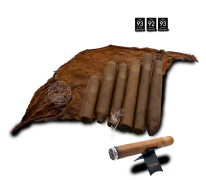 Aficionado for a lifetime

The story of the HENK MAORI cigars

The founder of HENK, Heiko Poerz, Aficionado for over 40 years and 18 years also active in the cigar business, decided to implement his entire know-how and wishes for a perfect cigar in a separate line. Because of his experience and personal preferences, only a cigar from Nicaragua could be considered.

Through his friendship with Didier Houvenaghel and AJ Fernandez he got help from two excellent and competent players in the industry. Didier, studied cigar harvesting in Cuba and is best known for his successful brands Nicarao, La Ley and La Preferida. AJ, one of the best blenders in the world of cigars, is just as outstanding with his brands San Lotano, New World, Enclave and many other boutique blends. He is also responsible for the production of Didier Houvenaghel‘s cigars.

The first cigar was a Gran Robusto with a 55mm ring size. A delicate cigar with nutty aromas, spicy herbs and delicate sweetness with a very creamy smoke. Later on, roasted, leathery and nutty flavors with caramel sweetness. Super ash, perfectly rolled. Medium +.

On a scale from 1-10, Didier Houvenaghel rated the cigar with a „7“ for strength. So rather a cigar for the late hours, when one has much leisure for the enjoyment of such a masterpiece.

The name and the logo engraved in every cigar goes back to the name finding that Heiko and Didier had on Nikoi Island (2 hours away from Singapore). Together with another friend, they smoked some of the final Puros and were searching for a suitable name. At the sight of the wrapper in this cozy sunset overlooking the skin color of the friend, who belonged to the Maori ethnical group, the three aficionados agreed that HENK MAORI would be a really good name.

At the sight of the splendid Tatoos from his friend and the explanation on the meaning and origin of the Tatoos – In connection with the traditional ceremonial dance the „HAKA“ seen in Rugby – the name was perfect. Since Poerz was also one of the first to laser cigars in Europe, he commissioned the best Maori tattoo artist to create a logo that means happiness, success and power. The result is now found on every cigar and also as a gold coin on the spectacular boxes.

In 2018, HENK launched another two sizes, the La Doña & the Masterpiece. And there are more to come …